Now that we’ve gotten your attention…yes, there is a neat spot in Barbados where you can just hang out and be yourself, and it is called Balls Bar. This space is like an oasis where you can easily refresh yourself and also meet friends and discuss even the important issues of the day.

When you meet Corey Watson proprietor of the space you immediately embrace a guy full of energy, who keeps the atmosphere charged for action. This guy knows how to keep his shop together. Actually he said that he had his eye set on being an astute business person from the time he was in 4th or 5th form at CP School. Corey says that he always had the vision to be involved in business and as a leader as well, but, he didn’t get there in the time that he wanted. However, it wasn’t until about two and a half years ago that this dream became a reality. 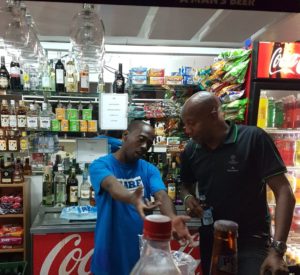 Corey on the left with a customer

Corey, worked in other companies where he ended up being a leader many times and this more or less groomed him for this space. In fact that is exactly the space that he wanted to be in – that of being a leader. He was shown the ropes while he worked in a private sector organisation ending up as a quality assurance lead.

What is there at Balls Bar?

The character of the traditional shop has been modified to add a bit more modernity to it. That being said, the good old fashioned cooking and more like having your “grandmother’s” food which is great, yet affordable and filling. The service is great, and persons are always surprised that at this shop, you can pop in for breakfast. Yes! Breakfast in a local shop, as well as ice cream on the cone, and now you can even get your specialty coffee as well on this spot. Therefore it is more like an experience that you get.

Corey was asked what advice he’d give, and he kept saying “never give up…” His emphasis was on his experience of being determined and committed as he commences around 4:00 am daily and go through until sometimes early the next morning. He reminded us that he was Quality Assurance leader, and he had to give up this position to take over full control of his shop. This was particularly poignant as he was working two jobs and had also placed persons to manage the shop on his behalf, but there was pilferage. Each time he changed the persons who assisted in the shop, the results were the same. This meant that he had to give up his corporate job to run his own business full time. Corey indicated that had he taken on the way that persons treated his business, it would have been detrimental. 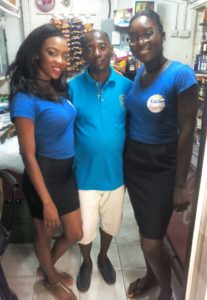 “The running of a business calls for determination, commitment, as well as the full 360 degree of promotion, procurement, budgeting and people skills….” Further to this, Corey said that “…you cannot expect to get the million dollars overnight… but, once you have that laser sharp focus…then you’ll get somewhere.”

At Balls Bar, just to the shop is an effort as well to inspire young persons to set goals and objectives. This is just part of the vision, as he says that there is more to life than drugs. In fact, to be successful at running more than one business is a serious path that Corey is on, and in his mind’s eye this is just the ground work. Furthermore in these economic times – any businessman has to be prudent in running his operation, and then eventually expand to other sectors, as well as help to redefine our culture of a shop.

This focused and ambitious member of the Watson family says to find his shop is very easy, and in fact on Valentines day 2018, he has embarked on an initiative. Balls Bar, will have a Medical Doctor in house to do free blood pressure checks from 10:00 am until 2:00 pm.There are of course incentives for CP Old Scholars to do business here, just show your CPOS Card. 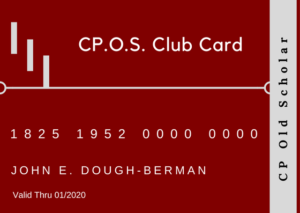 Get Your Club Card – HERE